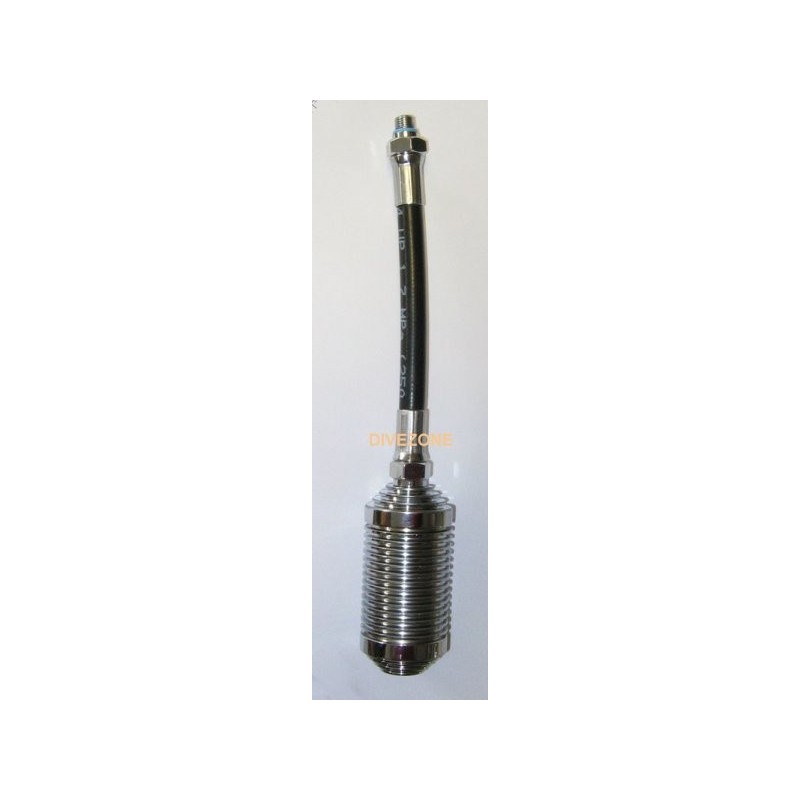 This product is not sold individually. You must select at least 1 quantity for this product.

Add to my wishlist

Discontinued Product. Not available for order.

The Michalak heater (GM) is designed to protect diving machines against the phenomenon of "freezing" of the second stage during dives in cold waters. An additional advantage is the reduction of energy loss by the diver, which is lost to heating in the lungs of the respiratory air. Heat loss is significantly reduced when using GM.DIVEZONE.PL

PRINCIPLE OF OPERATIONDIVEZONE.PLWhen using the regulator, the pressure of the breathing factor is reduced.If the cylinder pressure is 200at, after the first stage of the regulator, it decreases to a value of about 10-over at ambient pressure and then to ambient pressure after the second stage.According to the effect of Joul Thompson, at the pressure and temperature values ​​that we face when diving, the air temperature drop (at adiabatic) is about 0.17 ° C at a pressure reduction of 1 atm. This means that when the pressure is reduced by 190 degrees at the first stage of the regulator, the temperature drop can be around 32.3 ° C. Temperature drop at the second stage of reduction where the pressure is usually reduced by about 10 "only" 1.7 ° C. In fact, the conversion is not adiabatic and the temperature drops are not so critical. The higher the airflow through the regulator. Such a situation (increased flow) takes place when filling a jacket, dry suit, or when we breathe in two or more people, whether using an additional second stage (octopus) or using a single mouthpiece.Any increase in airflow from the cylinder reduces the temperature of the air leaving the first stage of the machine. The water temperature in our lakes is about 6 ° C at depths of 20m, even during the hot summer.The air cooled to several or several degrees below zero (this value is strongly dependent on the amount of gas flowing through) through the medium pressure hose, enters the second stage of the machine. The hose of the machine is made of rubber (heat insulator) the air is not able to warm up from the surrounding water (although the water has a positive temperature) The atmosphere in the can of the second stage of the respirator is moist, contains the breath exhaled from our lungs, and always some water. Together, these are sufficient factors to cause the formation of ice in a very sensitive place; between seat and valve plug of the second stage. The effect is not closing the valve of the second stage of the automaton, which initially manifests a constant second "outflow", going into a sudden, uncontrolled outflow of air often equal to the maximum expenditure of the machine. This is equivalent to the loss of the whole supply of breathing fluid in one minute or two. The Michalak heater is an efficient heat exchanger in which the air leaving the first stage of the machine warms up to a temperature close to the temperature of the surrounding water. As a result, the air entering the second stage of the machine does not have the effect of popping up. The second advantage of GM is that the air that the diver breathes is warmer than in a normal breathing machine, which increases the thermal comfort of the diver and reduces the sensitivity of the upper respiratory tract to a cold.In February 2004, at the request of the Underwater Technique, the Naval Academy, a team of specialists from the Department of Diving Technology and Underwater Works, AMW carried out laboratory tests of an ATX-50 respiratory machine by Apeks along with a GM heat exchanger.

The study contains 14 pages. The purpose of measurements:

ATTENTION!!!The breathing air must be "dry" (properly operated compressor), there must be no water in the bottle. When using humid air, ice may form on the filter or inside the first stage of the automaton, which will result in blocking the air flow (the machine will "cut" or "do not feed") or the effect of constant flow (if ice prevents the mushroom-nest assembly from working).

© 2002 - 2021 All rights reserved. The store is run by a company DIVEZONE.PL Sp. z o.o.
Divezone.pl uses "cookies" to provide services: statistical, social and functional. Using the website without changing the settings for "cookies" means that they will be placed on your end device. Changes to the "cookies" settings can be made at any time. We have provided detailed information in Privacy and Security Policy..