You are here: > Regulators 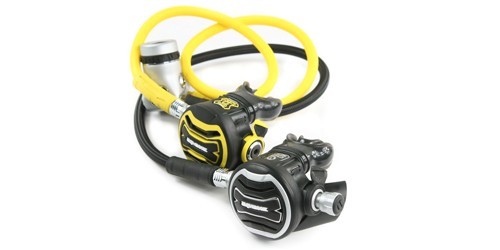 Divers, especially at the beginning of their diving adventure, often ask themselves this question.

The diving regulator is one of the more expensive elements of diving equipment, it requires maintenance and care, and due to its complexity, many divers fear that they will not be able to choose the right device for themselves, as ...

Divers, especially at the beginning of their diving adventure, often ask themselves this question.

The diving regulator is one of the more expensive elements of diving equipment, it requires maintenance and care, and due to its complexity, many divers fear that they will not be able to choose the right device for themselves, as it seems too difficult to study the laws of physics governing the operation of the device.

Therefore, many divers decide to buy other elements of the equipment: jacket (wing), dry suit or wetsuit, leaving the topic of buying a regulator at the very end, while it is the most important element of our diving equipment together with the diving computer.

The diving regulator takes care of what we need the most underwater - a smooth and comfortable way of administering the breathing medium, so it is definitely an item of equipment that should be on our shopping list right after buying a diving computer, and preferably together with it.

Renting a regulator, even though at first glance it seems to be an economical and not very troublesome solution, can actually cause a lot of problems and great discomfort.

Dive regulators that can be rented in diving centers are the simplest, cheapest regulators and the comfort of breathing from them is not too high.

Most often, the regulators offered in diving bases are very worn out, often they have damaged, bitten mouthpieces and with disinfecting it may be various.

If we additionally use a dry suit during diving or have a computer with a transmitter, there are additional problems related to the configuration of hoses connected after the first stage, moreover, dive regulators from rental shops in different parts of the world will operate in DIN and INT systems.

Own regulator means safety and comfort, and these are the most important elements in diving, moreover, there is still a question of hygiene, own configuration, weight, breathing resistance and, what is particularly important, choosing the right machine for your needs.

The design of the regulator is important for individual preferences (see below), and the economic issue is also a relative one - modern regulators are of excellent quality and even those from the lower price range guarantee comfort and convenience that earlier generations of divers could not dream of 20 or 30 years ago.

Construction and tasks of the diving regulator

Diving regulator is the heart of our diving set - it manages the pressure reduction from the cylinder, distributes the air or diving gases to other parts of the equipment such as jacket (wing) and dry suit.

- first stage: screwed directly to the diving cylinder, it is in it that the first reduction of high pressure gas from the diving cylinder is made to about 10-15 at; the types of the first stages are divided into unloaded and unloaded, as well as piston and membrane (currently prevailing on the market), due to the type of connecting valve with the cylinder on DIN and INT, and also into automatic machines working with the pressure of 200 bar and 300 bar; the first stage has a specific number of HP (high pressure - usually one port) and LP (low pressure - usually 4 ports) ports, thanks to which it is possible to connect other elements: the second stage, a spare second stage of the automat (also called an octopus), a manometer, a hose to the inflator or transmitter;

- second stage: from which we breathe directly, equipped with a mouthpiece, which reduces the gas pressure to the ambient pressure, can also be relieved or unburdened, with the possibility of adjusting the breathing resistance. The unburdened second stage is no longer practically present, but you can find many such used authomatos, so be careful.

It can be said that our set of regulators includes a manometer (thanks to which we know the height of pressure in the cylinder) and hoses for a jacket and possibly a dry suit.

Of course, we are talking here about a classic one-bottle configuration, it will look a bit different with a two-bottle twinset or sidemount configuration - the Apeks and Tecline companies have ready-made factory sets for this type of configuration.

If we dive mainly in the area of Advanced level diving privileges (i.e. at 20-30m depth), we can successfully supply one of the basic models, which will allow us to dive safely and comfortably and will not ruin our home budget, such as the Apeks ATX 40/DS4 with Octopus ATX 40 and manometer or Aqualung Core Supreme with Octopus Core and manometer. These sets are immediately equipped with an octopus and a manometer. If you do not have your own inflator hose, it is best to buy it in a set right away. Another very big advantage of buying a diving regulator in the set is that it comes straight away assembled and tested - ready to dive. As the Mares company slogan "Just add water" says.

When diving deeper and also in cold waters, it is worth thinking about a more advanced regulators, with solutions to eliminate the possibility of freezing underwater, as well as with less breathing resistance - then it is better to opt for a more robust machine of the cult type Aqualung Legend + Octopus Legen or Apeks XTX 200 with XTX 50 acetopus.

The above regulators are also chosen by technical divers and at the same time the technical configurations for twinset or sidemount diving differ significantly from the configuration of the single bottle automats. In addition, the more difficult conditions for such dives have to be taken into account. They are longer and at greater depths. Hence, the dive regulators for such dives must be fully reliable and have minimal breathing resistance.

For divers, who particularly care about super low weight and every gram of equipment is important during long journeys, several manufacturers have created lightweight, traveling vending machines, which are not so successful due to, among other things, very delicate construction and low versatility in use (basically only warm, tropical waters) e.g. Apeks Flight or Aqualung Micron.

Operation and maintenance of the diving regulator

Modern diving machines do not require any special additional procedures in the field of operation training - the knowledge acquired during a basic diving course is enough to use the equipment correctly and take care of it.

If we want our regulator to serve us for many years, we should really remember a few important issues:

1. remember to rinse the unit with fresh water after each dive, not allowing the first stage socket to flood (at the same time, it is worth mentioning here the excellent ACD system developed by Aqualung, which causes the first stage to open only under pressure so this problem will not occur here)

2. let us regularly service our regulator in an authorized diving equipment service point (usually each shop and diving centre has its own service and trained personnel)

3. let's always take with us the basic repair kit - spare hose, mouthpiece or o-rings - can be useful during diving trips.

Do not attempt to modify, modify or repair your regulator by yourself if you do not have the necessary training.

The desire to be underwater, or the story of the creation of the breathing apparatus

Since ancient times, people have tried to go underwater - mainly for purely practical purposes - repairing the ship, extracting valuable artifacts from the wreck, but also pearl fishing or catching molluscs or crustaceans.

The first ancient constructions in which man tried to provide the breathing medium were long tubes which allowed snorkelling at a maximum depth of about 2-2.5 metres, as well as leather bags with air. Some say that the first diving bells were made as early as the time of Alexander the Great.

Leonardo da Vinci was the first to describe and present the construction of a diving bell, but there is no evidence that such a device was built on the basis of his design at that time.

In the 17th century Alfonso Borelli created the first idea of a diving system based on a helmet made of boiled leather, tubes and air bags and even chemical carbon dioxide absorbers, but the knowledge of physics at that time did not take into account the increase in pressure, so this project was doomed to failure.

In the 18th century another revolution took place - John Lethbridge constructed the first real, individual diving system consisting of an oak cylinder with holes for arms and legs, powered from the surface, this device has been operating successfully for many years.

It was not until the 19th century that Siebe was invented - an efficient surface-powered diving suit, although earlier attempts to create this type of device by Dr. Ferminet (Machine Hydrostatergatique) or the Klingert system were also milestones in the development of diving.

Siebe and the Dean brothers (considered by some to be the creators of the diving helmet) competed in the market at that time and managed to sign many lucrative government contracts for their inventions, which enabled penetration of the underwater world, but at that time they were mainly used for military purposes.

Yves Le Prieur did not make the diver independent of surface power until 1925, the diving cylinder was already charged with air up to 150 bar and the diver could finally swim and move freely underwater.

However, the most wonderful invention was the creation of the diving regulator by Jacques Cousteau and Maurice Gagnan in 1942 and with it the modern era of breathing apparatus began. Interestingly, the automaton was based on a gas regulator taken out of the car.

One could even say that despite the fact that about 80 years have passed since the creation of the diving regulator by Cousteau and Gagnan, modern regulators are only some variations of the original in terms of general design and principle of operation.

Taking a breath from your regulator, it is worth mentioning these several centuries of history, the fate of their creators' inventions, which led to the fact that the desire to be underwater could come true.

Regulators There are 217 products.

Regulators There are 217 products.

© 2002 - 2021 All rights reserved. The store is run by a company DIVEZONE.PL Sp. z o.o.
Divezone.pl uses "cookies" to provide services: statistical, social and functional. Using the website without changing the settings for "cookies" means that they will be placed on your end device. Changes to the "cookies" settings can be made at any time. We have provided detailed information in Privacy and Security Policy..